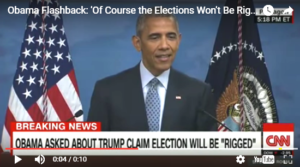 With nothing but hearsay from Democratic hacks and political appointees in the Washington D.C. alphabet soup aisle (CIA, FBI, NSA), the mainstream media carried the water one last time for the Clintons and in the process destroyed any credibility they had left. In a recent Time poll, 86% of Democrats said they were bothered by the interference, compared to just 29% of Republicans who said the same. According to the poll, 49% of independents said they were bothered.

Keep in mind these are the same polls that said Hillary had a 98% percent chance if winning the Presidency. The Clintons and media even pushed President Obama to carry on the fraud, which just conjured up visions of the Benghazi claims that the killing of our Ambassador was caused by a Youtube video. We witnessed liberal psychosis on full display on our TVs for the last 3 weeks as the mainstream media played ever last card they had trying to manipulate the electoral college.  Not only did their efforts fail to steal votes away from Trump, actually more electoral voters switched from Hillary to Bernie. Not even her own party wants her. And the only thing the hacking of the DNC showed was how Hillary stole the primary from Bernie Sanders.

But the mainstream media jumped the shark and went full in on the Russian Hacking narrative putting their biases on full display for all to see. They’re so damaged now from all their fake news stories about Russia they trotted out as facts, that the Trump administration would be justified in banning them from the White House News Room for the next four years. In fact, one could argue they participated in an attempted coup of the Presidency.

The mainstream press were the ones who tried to disrupt and interfere with our free and fair elections, not the Russians. It’s time to shut them down politically once and for all and support the rise to the new media that helped save our country from four years of Hillary Clinton and four more years of fake news by the MSM.