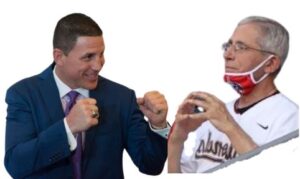 Local Nevada Attorney, Joey Gilbert, filed a lawsuit on behalf of America’s Front line Doctors against Dr. Anthony Fauci seeking to stop the sale and distribution of the CV19 vaccines, citing that its experimental and that Fauci and others defendants have disclosed and undisclosed financial conflict of interests. Fauci sits on the pro-vac Bill Gates Foundation. Joey Gilbert announced Saturday, at the Ahern Hotel, that he will challenge Gov. Sisolak.

The lawsuit was filed in U.S. Federal Court’s NORTHERN DISTRICT OF ALABAMA on June 10, 2021. The Plaintiffs, America Front-line Doctors, were the folks who announced last summer, in Washington DC, their huge success treating CV19 with hydroxychloroquine. Following the press conference of actual front line emergency room doctors treating CV19 with hydroxychloroquine, Google, Twitter and FB removed their website and platform from the internet.

“The Emergency Declaration and the Vaccine EUAs were the keys that
unlocked the profit potential of the COVID-19 crisis. They enabled the Vaccine
manufacturers to open the door to the vast American market, enter and reap billions of
dollars in profit by exploiting the fears of the American people. In the first quarter of
2021 alone, Pfizer has earned $3.5 billion, and Moderna has earned $1.7 billion, in
revenues generated from the sale of their respective EUA Vaccines. Plaintiffs’
investigation has revealed that the Defendants appear to have numerous disclosed and
undisclosed conflicts-of-interest that should deeply trouble any reasonable observer
concerned about the integrity of the EUA process. For instance, Defendant the National
Institutes of Health (“NIH”) appears to be a co-creator and co-owner of the intellectual
property in the “Moderna COVID-19 Vaccine.”

At Joey’s speech Saturday before a Pro Trump audience “Stop taking the Fauci Oochie and don’t give it to your kids”. Joey went on to accuse Fauci of lying about the origins of CV19 and hydroxychloroquine. Currently over 55% of Nevadans have refused to take the CV19 jab.