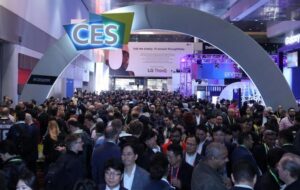 After concealing COVID 19 from the world, the Chinese government allowed thousands of infected citizens to attend the biggest convention in Las Vegas, the Consumers’ Electronic Show, in January 2020. Now scientific evidence has emerged that those infected Chinese citizens infected thousands attendees from some 160 countries in the hails and exhibits.

The Chinese Communist Party, who’s ruled China since 1949, concealed the Corona Virus (which they may have developed in a super bio lab) in December 2019 from the World Health Organization, allowed thousands of their infected citizens to travel all across the world, resulting in at least 50,000 dead Americans so far in just 4 months without firing a single shot. BTW the U.S. has by far the worst death toll of any nation.

As reported in American Public Media:

The Consumer Electronics Show in Las Vegas becomes an intriguing puzzle piece of the pandemic’s spread after new Bay Area Covid-19 deaths indicate the virus’ presence in the United States earlier than thought.

When a doctor phoned Michael Webber on Monday with the results of his antibody test for the coronavirus, her first word was filled with irony: “Congratulations.” He had tested positive, meaning that the 49-year-old who divides his time between Texas and France had been infected with the virus and recovered.

While millions of people worldwide will likely have antibody tests that return positive results, Webber’s outcome offers new insight into how the virus may have begun to spread. He was among more than 170,000 people who attended the Consumer Electronics Show between Jan. 7 and 10 in Las Vegas, a four-day event that attracted technology professionals from around the world.

Speculation has been whipping around social media for months that the virus might have incubated during CES and was sprayed worldwide when attendees traveled home. However, Webber’s disclosure of his test result to APM Reports is the first clear evidence that the virus was likely circulating at the conference.

Webber’s revelation comes at the same time that public health officials in Northern California, including Silicon Valley, reported three newly confirmed coronavirus deaths. One of those deaths was in early February, which indicates that the virus was probably spreading in the United States weeks earlier than previously thought.

The Santa Clara County Public Health Department’s announcement on Tuesday also demonstrates just how little is known about the early spread of the disease because of limited testing and initially strict criteria for testing, which missed early transmissions.

More deaths are being investigated, Santa Clara officials say, which will likely result in additional confirmed Covid-19 cases in the area.

“We know that each of these deaths are like iceberg tips,” Dr. Sara Cody, the health officer for Santa Clara County, said at a press conference Wednesday. “When you have an indicator like death or ICU numbers, there are many cases that underlie those iceberg tips. There was a significant degree of community transmission.”

The timing of CES and the people who attended could be more clues, or “ecologic evidence,” about how the virus spread in Silicon Valley at a time when people weren’t paying attention, said Dr. Peter Chin-Hong, an infectious disease expert and professor at the University of California San Francisco School of Medicine.

“As a clinician, it was weird to be in the Bay Area to see Santa Clara County being the hotspot,” he said. “You would think it would be San Francisco because there’s tons of people going into [the airport] and a lot of Chinese population, but I think there has to be something else to this.” It will take more research to determine whether CES is that connection, he said.

The conference, a well-known schmooze-fest of tech leaders from around the world, created an ideal environment for a virus to spread, particularly if highly infectious people were present. People jam into convention halls and casinos, share business cards, shake hands and socialize in close quarters with attendees from tech hubs across the United States — largely New York, Chicago, the Bay Area, and Southern California — and at least 63 other countries.

More than 150 companies from Santa Clara County, which includes Silicon Valley, set up exhibits at CES. Chinese executives also were amply represented at the conference — their companies accounted for about 25 percent of the firms scheduled to set up exhibits, an APM Reports analysis of conference records found. A little more than 100 people attended from Wuhan, home to the first recorded outbreak in late 2019, according to conference organizers.

All of this, Dr. Chin-Hong said, points to how universal the spread of the virus could have been at a time when transmission was thought to be isolated to China.

As the conference began, news about a mysterious new virus in Wuhan was starting to emerge but there was still little publicly known about the disease. Nobody was yet reported dead, and it wasn’t until the first day of CES that Chinese health officials had even put a name to the novel coronavirus.

Behind the scenes, however, U.S. officials at the National Center for Medical Intelligence, a division of the Defense Intelligence Agency, had pieced together the potential seriousness of the virus, ABC News would later expose.

And as the conference was kicking off — with three of President Trump’s Cabinet members and his daughter Ivanka Trump in attendance — a warning based on that research was included in the President’s Daily Briefing.

But CES went on as planned, creating an ideal venue for transmission that may never be fully understood because so few Americans were tested in January.

“Given that we don’t have the capacity to really detect new diseases in that initial period of introduction, it’s a bit worrisome,” said Kevin Olival, an ecologist with EcoHealth Alliance who has been researching emerging infectious diseases over the past decade.

APM Reports spoke with multiple conference attendees who became seriously ill in the days after CES. Three of them are still waiting for results of antibody tests.

Based on the timing and the how little Covid-19 was understood, some of the attendees who fell ill after the conference eventually started questioning whether CES was a super-spreader event that helped put the United States on the path to having the largest number of reported infections and deaths in the world, with more than 820,000 confirmed cases and nearly 42,000 deaths to date.

CES organizers told APM Reports that they aren’t aware of any confirmed cases of Covid-19 from the conference. And they haven’t been contacted by any health, government, or corporate officials who suspected that someone who attended the conference was exposed to the virus.

But soon after the conference began, U.S. health officials started picking up worrisome signals about the potential for the mysterious pneumonia-like illness to spread.

On the conference’s second day, the Centers for Disease Control and Prevention alerted health care workers nationwide to watch for potential cases of the virus in the United States — particularly in patients who’d visited Wuhan and had unexplained, severe respiratory symptoms.

“We understood this could have a potential impact here,” said Dr. Michael Johnson, who received the alert in his role overseeing community health outreach for the Southern Nevada Health District. “I don’t think anybody around the world expected it to take off as quickly as it did.”

Epidemiologists across the globe, however, were looking closely at flights out of Wuhan in early January and some raised questions about whether people who seemed healthy might be infected but not exhibit symptoms until they were abroad.

Convinced I have the virus’

CES draws a jet-setting crowd. Webber stopped in Hawaii, Southern California and finally San Francisco on his way to the conference. For him, early January is a blur of travel, dinners and meetings.

Webber, a professor at the University of Texas at Austin who also works for a global energy firm headquartered in Paris, had been reading about the virus, so he was aware that he might be at heightened risk for exposure at CES. He was vigilant about washing his hands, had a flu shot and thought that he was prepared to fight off potential germs.

When the conference ended, he and other attendees began to fan out across the globe — back to Asia, Europe, and cities across the United States. On his way out of town, Webber was stuck at the airport for hours waiting to board a flight to London. He’d then fly to Paris.

“The lounge at the #LasVegas airport sounds like an infirmary,” he tweeted from an airport lounge where he waited for hours. He speculated that too much “hard partying” could be the culprit, or maybe it was poor ventilation or an unfortunate mix of global travelers at the height of flu season.

Sure enough, by the time Webber got home on Jan. 11, he was feeling ill. So was his boss, who had traveled with him to San Francisco and then CES.

They weren’t alone. By this point, the chatter on Twitter had started picking up.