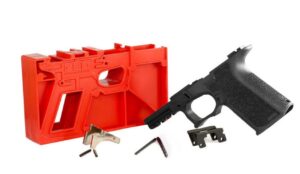 Joe Biden’s gun control actions this week are nothing more than political theater for his Dem audience in an attempt to prove he’s doing something about gun violence. But in fact, his Executive Order requiring back ground checks on pieces of plastic and metal that maybe guns in the future is already settled law. But with most things these days, we need an honest judicial branch to uphold the laws and the Constitution. Biden’s EO won’t last a week once a Federal Judge in Texas stops it nationwide. So what are ghost guns?

Federal law states that any metal or plastic materials fabricated less than 80% of a complete fire arm does not fall within the regulatory powers of the law. So companies make molds out of polymer and metal that are under the 80% rule. Since they are not considered a firearm they can be sold without a background check.

But these molds require extensive efforts to complete. They must be carefully drilled out and finished before a barrel and trigger assembly can be installed, which is extremely difficult for unskilled folks.

Companies market the unfinished pistol molds with complete uppers and trigger kits together to maximize their profits. The only part of a gun that is regulated by federal law is the lower. The exception is the AR15 pistol stock, which Biden now claims he can regulate under his EO this week. An AR15 pistol is technically not allowed to have a stock unless the owner pays a $300 stamp fee and under goes another background check. But a few creative companies produced stocks that comply with the law providing support on the stock without requiring the stamp fee. Biden wants to ban these. But here again the companies, just like the 80% kits, have approval letters from the ATF to manufacture and market their products.

During the pandemic and the BLM / ANTIFA summer violence, folks were desperate to get guns and ammo only to find out they had to wait weeks or even months for their background checks. These 80% kits provided some relief to frightened Americans seeking to protect their families and businesses.

Many folks purchase 80% kits because they fear gun control from a government which constantly breaks the laws with impunity. Background check agencies at the state and federal levels are required to purge all the information on gun buyers, as required by the Brady Bill, following a successful background check. But many have been caught keeping the files unlawfully without any civil or criminal penalties.

Not one of the mass shooters in the last few weeks or years used so called ghost guns. So again Biden’s gun control theater does nothing to stop mass shootings by radical Muslims and other mentally ill folks. Meanwhile, Dems refuse to hold criminals who actually use firearms to rob homes and businesses accountable with tough prison sentences.