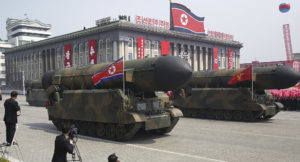 Today after President Trump blasted North Korea’s recent missile test and new intelligence has come to light about just how close N. Korea is to building a small nuclear weapon capable of mounting on an ICBM and hitting the US, the world is on pins and needles.

Just now N. Korea threatened to strike the US air base at Guam. This is just the latest in a long string of verbal threats North Korea has made towards the U.S. in recent months. The threats follow the UN Security Council passing sanctions this week that will cut off a third of their exports and revenue.

It has also come to light that North Korea has 60 nuclear weapons and not 10 as the Obama Administration reported. The U.S. does not feel it can trust the north with ballistic nuclear weapons and may feel it needs to take serious military action soon to stop the North’s march to a nuclear exchange with a first strike.