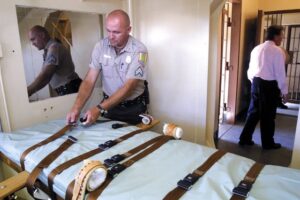 Judge Michael Villani’s order said convicted mass murderer Zane Michael Floyd had “exhausted his legal remedies,” and now faces his execution. The Nevada Department of Corrections was forced to produce a new lethal drug cocktail to perform executions in Nevada after pharma companies successfully sued to block the use of their drugs back in 2018.

On July 26 the ACLU filed a suit challenging Nevada’s drug protocol. Nevada Dems described the use of the experimental drug cocktail as “Using them would make Floyd a human guinea pig and turn his execution into what death penalty opponents have rightly called a cruel and dangerous form of experimentation on persons who, no matter how heinous their crimes, deserve to be treated humanely. That is an ethical matter, but it is also a legal one: in the U.S., all are to be protected from cruel and unusual punishment, and Nevada officials have no way of knowing whether their proposed methods meet that standard.”

But the same Nevada Dems are now seeking to mandate the experimental CV19 vaccines in Nevada, even purposing to restrict citizens from accessing food, shopping and work if they don’t submit to the experimental vax.

The State is purposing to use Fentanyl, a synthetic opioid analgesic that is similar to morphine but is 50 to 100 times more potent. That’s the same drug that’s killed some 70,000 Americans last year.

After self proclaimed commie, New York City Mayor Bill De Blasio announced the city will require a vaccine passport to dine, go to the gym and shop at any indoor venues, Vegas Dems are now pushing for vax passports here.

The leader of the Democrat party came out on twitter calling for vaccine passports.