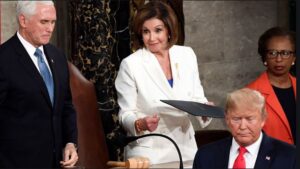 Then last night, in front of the entire world, Pelosi tore up, in his face, Pres. Trump’s official speech. Can another imagine if Pres. Trump had stood there and tore up the impeach report in Nancy Pelosi’s face? It would have been labeled hate speech and misogynistic and every other snowflake term.

It’s time Republicans, together, run on impeaching Nancy Pelosi. Of course a member of Congress cannot be “impeached” but they can refuse to seat her next year if they take back the majority. They can investigate her corruption and the hundreds of millions that fell into her lap over the last 20 years.

BTW the term wench means a female prostitute. Nancy Pelosio has sold her office, sold out our country and sold her soul for power.

Nancy Pelosi is the face of the modern day Democrat Party; old, rich, corrupt and white. But since the Republican party has been ran by RINO’s they’ve let everything she’s done slide. It’s time to demand that our House Republican candidates publicly announce whether they will support Nancy Pelosi’s impeachment (removal) or not. Elections must have consequences.