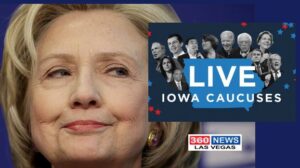 After Donna Brazile admitted that the DNC had indeed rigged the 2016 election in order to stop Bernie Sanders and throw the Democratic endorsement to Hillary Clinton, there has been wide speculation about continuing efforts this election cycle to deny Sanders the nomination once again. Sitting here at 9am Las Vegas time, with weeks to go until the Nevada Caucuses, Sanders’ supporters are seeing deja vu. Only this time the DNC won’t be able to blame the Russians or Pres. Trump.

This time the Iowa caucus results have been delayed supposedly because an election app created by Hillary Clinton’s former staffer. Shadow, an affiliate of ACRONYM is being blamed for the huge mess in Iowa raising alarm bells here in Nevada. ACRONYM was founded by CEO, Tara McGowan, former digital producer for President Obama’s 2012 presidential campaign.

And to make matters worse, the Shadow election app is also handling the Nevada Caucus.

Every hour this mess plays out, more and more folks across the political spectrum are calling for voter ID and paper ballots.

In 2016, Hillary limped out the primary only after cheating Bernie Sanders out of the nomination according to numerous insider reports. Hillary and the establishment are hell bent on stopping Bernie this time at all costs. Remember Hillary’s cheating in 2016 is what set off the entire DC server scandal leading to the fake Pres. Trump Russia investigation.

Only this time the Senate and the President are tied up in Nancy Pelosi’s orchestrated impeachment trial which now appears to have been part of a bigger plan to create a diversion while the DNC steals the nomination from Sanders again in Iowa.