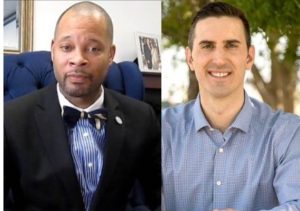 Governor Brian Sandoval has endorsed U.S. Sen. Dean Heller to retain his seat, State Sen. Michael Roberson for lieutenant governor and now he’s featured in an ad for Lidia Stiglich,  a Nevada Supreme Court Justice he named to the bench.

But Sandoval, who has declined to endorse fellow Republican Adam Laxalt or Democrat Steve Sisolak in the race for governor, told the Las Vegas Review-Journal he won’t be endorsing either candidate in the race for Attorney General, either.

“Positive things to say about both candidates, but I’m not going to get involved in the race,” Sandoval told the R.J.

Sandoval and Ford’s relationship has endured ups and downs.  The two have been on the same side of many measures, including major economic diversification packages as well as social issues such as a ban or conversion therapy, which Sandoval signed into law.  But Sandoval has vetoed many of the bills Ford toiled to pass, including paid sick leave and minimum wage.

“Governor Sandoval and I worked closely together in a bipartisan manner to protect health care access, increase public education funding, and keep our state’s economy on track,” Ford said in a statement to the Current.  “In a time when politics has become partisan and divisive, Governor Sandoval, my colleagues on both sides of the aisle, and I were able to work together and move Nevada forward. I appreciate his kind words and wish him well in his future endeavors.”

Most recently Sandoval and Ford have worked together to study the state’s criminal justice system and report the findings to the 2019 Legislature.

As reported in the: