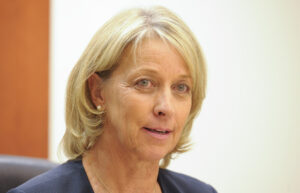 On March 24, 2020 Nevada Secretary of State Barbara Cegasvke’s office issued a press release claiming she along with the 17 counties had decided to move forward with an ALL Mail-In-Ballot against Pres. Trump’s wishes. Her office claimed she issued an order to all the counties to proceed uniformly with the Mail-In-Ballots elections.

But 360 served Clark County Elections department with a public records request seeking a copy of Cegasvke’s order. Clark County Elections Department’s response claimed no such Order was issued by Cegasvke. Instead, they claim Clark County requested permission to proceed with an all Mail-In-Ballot election which she approved it. It matters because clearly all 17 counties and  Cegasvke conspired in secret to make the change, costing tax payers in Clark County alone some $300K. The law requires all such meeting must comply with the open meetings rules. Clark County is currently being sued by the RNC and NVGOP over the $300K and violating the open meetings rules. 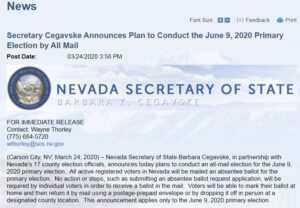 360 News Las Vegas served Clark County Elections Department with a public Records request seeking the written order from Sec. Cegasvke changing the June 2020 primary to a mail in ballot election. They responded with the attached letter from Cegavske’s office instead approving a change instead of issuing an order. 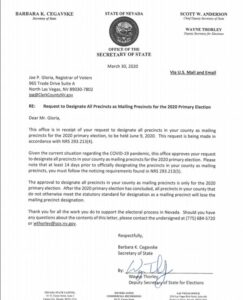