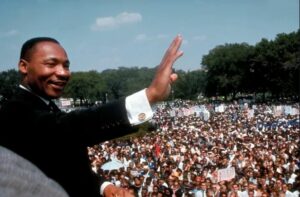 After struggling for over a decade against the Democrats and the KKK’s racist lock on power in the south, MLK’s Civil Rights Act of 1964 passed. Southern Democrats voted overwhelmingly against it of course.

But since then Democrats have worked hard to coop MLK’s rhetoric while pursuing policies that have turned most urban large cities into black ghettos, full of gangs, murder, broken families and broken dreams. Democrats refuse to take responsibility for the damage they’ve done to generations of black Americans. Instead Dems just turn up Martin Luther King’s speeches and blame Republicans for all their problems, even though many of those inner cities have been ruled with an iron fist by Democrat slumlords for decades.

Dems have turned to race hustlers like Al Sharpen and Jesse Jackson who have profited by race baiting large corporations and by trading on MLK’s dream.They need the races fighting and divided so no one looks at them and their failures.

The Dems have turned MLK’s dreams into a nightmare.

The fact is Republicans freed the slaves in the Civil war, fought against Jim Crow Laws in the South and voted for MLK’s Civil Rights Act of 1964. Imagine where blacks would be today without the Republican Party. We don’t have to imagine, just look at our inner cities run by Democrats for the answer.