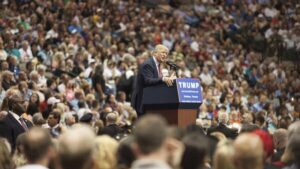 A million people are expected to descend on Washington D.C. this week after President Trump called for a rally on January 6th to protest the election results. According to a recent poll, over 85% of Republicans believe the election was riddled with fraud and that the election was stolen.

What can a million Trump supporters expect Wednesday? Besides the crisp cool 42 degrees forecast for DC, besides the National Guard, besides Antifa waiting to beat the crap of Trump supporters, besides no Porta Potties, besides all the restaurants closed, it should be a hoot.

President Trump will be speaking from the White House Balcony making his case why the election was stolen. The Lib media will refuse to cover it and call Trump a separatist threat to our country. Unless the million Trump supporters plan on digging bunkers and World War I style trench lines to defend the White House against Joe Biden not much more will be accomplished.

President Trump possesses great power to move the dial by arresting hundreds of people, including several Election officials complicit in the massive voter fraud. Then declare the election null and void and hold a new election in the five battle ground states in 60 days.