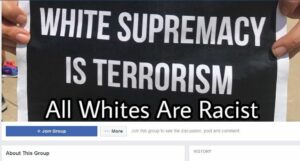 As a reporter who’s had a story and meme or two declared in violation of Facebook’s Community Standards, its shocking to find a currently page on Facebook called “All Whites are racist“. The page of course is run by Bernie Socialists/Communists and has been up since 2015. No Facebook algorithms have red flagged it. No Facebook complaints causing any concern in Silicon Valley in the headquarters of FB. No fact checkers declaring it false and or misleading.

Hate groups are approved on Facebook as long as the hate is focused at Donald Trump and “Whites”.

The page describes itself as “We are witches and empaths (level two or above) for Bernie Sanders, socialism, and an end to capitalism”.

“All Whites are Racist” page goes on

By seeing this message, you are endorsing the following binding spell against Donald Trump:

Bind him so that he shall not break our polity
Usurp our liberty
Or fill our minds with hate, confusion, fear, or despair
And bind, too,
All those who enable his wickedness
And those whose mouths speak his poisonous lies

So mote it be.

The page has over 35,800 members and is extremely active with over 41 posts just in the last 24 hours. Clearly doubles standards on display on this page demonstrate the needs to lift the federal protections that internet companies like this enjoy that protect them from lawsuits. The group is private so any members of the liberal news media who may be members are protected.

Please note, we are not sure if this page is really Pro Bernie Sanders or a parody, it’s that stupid.