CAN YOU CONCEAL CARRY INSIDE YOUR STORE WITHOUT A CCW? NOT ACCORDING TO POLICE

CAN YOU CONCEAL CARRY INSIDE YOUR STORE WITHOUT A CCW? NOT ACCORDING TO POLICE 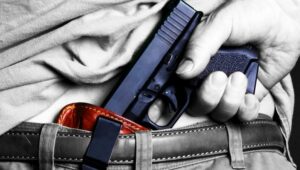 As crime spikes in Clark County, more and more store-owners are being victimized by armed robbers. Metro is overwhelmed. Let’s face it, you’re the first responder if you’ve been robbed. Leaving a gun under counters may not be the best option for businesses. The ideal option is to conceal carry a firearm so you always have it on your body no matter whether you are inside or outside of the store. But getting a CCW can take four months in Clark County and that’s after you have taken the weekend class.

So a business owner must choose between violating the law by conceal caring a firearm while his application is being processed for four months or die? BTW this applies to stalking victims too. They must wait four months for their CCW’s too. How many felons are going to walk into the police station and declare they own a gun and apply for a CCW? So, once again, only the law abiding citizens are forced to succumb to these stupid laws, created by stupid people in government, who don’t read the laws they vote for in the legislature written by lobbyists. BTW very few criminals are charged with violating the CCW laws even though they conceal carried their guns into and out of the armed robbery crimes. But if the store-owner uses their firearm in defense of their life without a valid CCW permit they can be charged.

Putting aside the U.S. Constitution for one minute and assuming the state has the right to give a law abiding citizen permission to conceal carry their firearm; there’s no excuse in this day and age for LVMPD to take four months to provide CCW’s. And why are they doing this job in the first place? When a person walks into a Federal Firearms dealer’s (FFL) gun store and buys a gun, they must pass an instant background check conducted by the State of Nevada Department of Public Safety. On average, the background checks takes around 20 minutes to process. But somehow it takes Metro Police four months to process a CCW application?

Sheriff Lombardo has responded to this issue in the past saying, they run a much deeper background check than the one ran at gun stores. WHAT? So somehow the Nevada State background check system to allow a lawful possessor to walk out of a gun store with a gun and legally open carry is sufficient, but if you want to put that gun in your purse or pocket or waste-band then you need another four month background check?

Keep in mind there are currently some 13 states that do not require any permit to carry a firearm.

BTW the violent crime rate in those states are all far lower than in Clark County.

Recently, I was the victim of an armed robbery. I didn’t have a gun on me in store. The bad guy had a hand gun and was clearly under 21 years old. So besides using a gun in the commission of a crime he was breaking the law because he clearly obtained the gun illegally since only people over 21 years old can lawfully purchase a hand gun in Nevada. Every single gun-owner cliche came to mind while I stood their wondering if he was going to kill me.

1. The bad guy didn’t care about gun laws or any laws for that matter.

According to Don Turner of the Nevada Firearms Coalition, the Clark County Sheriff takes about 48 hours to conduct a background check in order to issue retired police officers CCW’s thru the HR218 program. In addition, the Sheriff can offer a temporary permit to those in extreme need like a stalking victim. Other counties take 20 days. The DMV takes your picture and issues you a permit to drive while you wait.

There’s no excuse for the government to take four months to issue a person a CCW permit. If a person passes the instant NV State background check they should receive a permit for their CCW instantly, period.