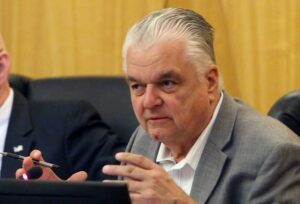 Governor Sisolak may have violated Roe v Wade when he signed an emergency measure last week restricting the prescription of chloroquine and hydroxychloroquine drugs that may help treat  COVID-19. The request for emergency regulation was made by the state Pharmacy Board and has been clarified as an attempt to prevent stockpiling or hoarding of the drugs.

The Governor’s order stops prescription for out-patient COVID-19 use, only allowing those in hospitals to access the medication for that purpose. This prevents family doctors and primary care physicians outside of hospitals from having the ability to treat COVID-19 patients with these drugs as an early intervention in efforts to prevent the progression of illness leading to medical complications and hospitalizations.

The order additionally limits prescriptions in excess of a 30-day supply to those who may be treating lupus, rheumatoid arthritis and other applicable and approved uses of these drugs.

What does Roe v Wade have to do with this?

While the subject matter is polarizing and creates a deep cultural divide, in light of the Governor’s recent executive action, it is long overdue we look at the case through a wider lens. In the landmark Supreme Court ruling, Roe v Wade interpreted that the state cannot unduly restrict access to medical procedures or treatments. The ruling should not be seen as only to apply to abortion procedures.

I’m not citing Roe because I think it was a particularly good SCOTUS decision. Firstly, the ruling is the primary example of judicial activism, if there ever was one. The court deviated from their given power of judicial review and acted as a super-legislature. It appears the Court behaved as politicians, scientists and philosophers. Yet, when stripped of all the aforementioned features and activities the Court shouldn’t have been doing what remains is a rather basic ruling.

The decision says that the Due Process Clause of the Fourteenth Amendment prevents the government from infringing on the right to privacy. This privacy includes the right to choose a procedure or medical treatment. The only type of regulation the state may do must meet the standard of a compelling governmental interest and the state cannot interfere without due process of law.

Did the Governor have a compelling state interest in restricting doctor’s ability to prescribe the drugs?

The state would claim they had a compelling interest to restrict access, citing “reports of stockpiling”, however; the state Pharmacy Board didn’t bother to indicate in their request where those reports came from. The alleged reports could be from actual pharmacists in our state or The New York Times article relaying conversations their journalists cited, sourcing from Twitter. I would expect the standard for a compelling state interest in the effort to forgo constitutional privacy and due process rights would at least include a citation of such reports.

The State of Nevada and Pharmacy Board could work to identify doctors who are bad-actors; abusing their licenses to stockpile drugs for personal and familial use. In turn, the community would be protected by reporting of violations against doctors who lack judgment or medical ethics. Instead, the state is now protecting unethical doctors from themselves rather than allowing reputable doctors to practice in good-faith. What they created is the climate for patients to be denied medication, specifically as an early intervention, by inserting the state between doctors and their ability to treat patients.

Why does Nevada cherry-pick when Roe v Wade should be applied?

Governor Sisolak has a record of supporting pro-choice policy. During his campaign for Governor he said;

“It is a decision between a woman and her doctor, and her faith, and her husband and whoever she wants to be a part of it. But it is not something for a political person to decide.”

Last year, Nevada acted to make radical changes to state abortion laws by passing The Trust Nevada Women Act. The new laws help facilitate black-market abortions by decriminalization and erode basic protections for children such as age verification. The legislature was so worried that the Roe decision might be overturned that they jeopardized basic safe-guards in response.

Nevada’s politicians who supported the recent abortion reforms to bolster the Roe decision have been disingenuous in their actions. It seems the Governor is willing to infringe on the rights found in Roe by decree, without so much as requiring a single citation from the Pharmacy Board as a basis for unconstitutional patient-doctor interference. These politicians don’t uphold the actual rights outlined in Roe v Wade; they simply endorse abortion.