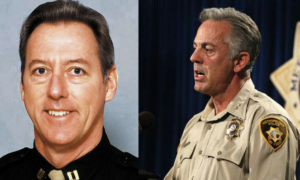 Las Vegas Sheriff Joe Lombardo is starting to sweat as the election for Clark County Sheriff closes in.
With about a month left before the people of Las Vegas decide whether or not to re-elect the disgraced Sheriff on June 12, 2018, sources within LVMPD say Lombardo is scrambling for campaign endorsements, even groveling at the feet of his former opponent.
A source within LVMPD has informed this reporter that Lombardo recently met with former LVMPD Captain Larry Burns, who challenged Lombardo for the position of Clark County Sheriff. During the meeting, Lombardo reportedly begged Burns for an endorsement. However when Burns told Lombardo that he would not give him an endorsement, Lombardo allegedly told Burns that he would give him a position at LVMPD if he secured a second term as Sheriff. While the source within the LVMPD wished to remain anonymous out of fear of backlash, Lombardo’s meeting and apparent bribe offer to Burns was confirmed by Nephi Oliva.
Oliva is a Las Vegas native and owner of Las Vegas Gunfights. Being friends with Burns, Oliva said he is privy to the discussion and Lombardo’s failed attempt to secure an endorsement from a well known former member of law enforcement.
Independent Journalist Lou Colagiovanni was first to confirm the anonymous tip Loomer received from LVMPD regarding the meeting between Lombardo and Burns, and Lombardo’s apparent use of a bribe to secure a campaign endorsement. Colagiovanni said, “Lombardo shamelessly attempted to buy the endorsement of former LVMPD Captain Larry Burns. Clearly Burns has a history of having too much integrity to even muse about the idea of sabotaging his deeply held values for Lombardo’s political gain. Lombardo is clearly afraid of the dirt that Burns has on him, but he is unaware of the fact that many others, like myself, also possess that knowledge.”
Lombardo’s groveling to former opponents and colleagues who he has previously personally attacked is further proof that he is struggling to gain a sense of credibility among law enforcement following the devastating rejection he faced by rank and file members of the LVMPD and Las Vegas Police Protective Association after they refused to endorse him in March.
On March 20, 2018, an email was sent out by the Las Vegas Police Protective Association asking LVMPD officers to vote on whether or not the association would endorse Lombardo, or one of the four other candidates running for Sheriff. The letter, which was sent out to 2,808 officers, was completely ignored by 1,769 members who chose to not open the email, with only 775 members actually casting a vote.
The vote to not endorse Lombardo was overwhelming, with nearly 82% of LVMPD officers rejecting Lombardo for another term as Sheriff. Of the few officers who did vote, 24% voted for Tim Bedwell, Lombardo’s strongest opponent in the race to become Clark County Sheriff.
The refusal and apathy by a majority of Las Vegas police officers to cast a vote in favor of Lombardo reveals a strong contempt for the sitting Sheriff among Las Vegas law enforcement, a contempt that is shared by both local Las Vegas residents as well as concerned American citizens unhappy with Lombardo’s performance.
Sheriff Lombardo’s poor handling of the Oct. 1, 2017 Las Vegas shooting has made him a figure of suspicion, nationally, and some say an absolute laughingstock within the LVMPD. His lack of transparency regarding the investigation into the worst mass shooting in U.S. history, his fabrication of the official shooting timeline, and his apparent disregard for freedom of the press has caused LVMPD’s overall reputation to suffer, which in turn has negatively impacted the public’s perception of Metro officers who have now been labeled as corrupt and dishonest by many in the media and public in the aftermath of the October attack.
These new allegations that Lombardo bribed Burns for an endorsement certainly don’t help him with his image and his quest to secure another term as Clark County Sheriff. Instead, these allegations which were independently confirmed by three different sources further suggest what many have been saying for years about Lombardo being a power hungry corrupt official who often abuses his position as Sheriff.
In comparison to Lombardo, Bedwell, Lombardo’s opponent who is a retired North Las Vegas police lieutenant, has praised the Metropolitan Police Department’s response to the Las Vegas Shooting while also remaining fairly critical of the lack of transparency regarding information, or lack of, about the shooting.
It is evident that not even Lombardo’s own officers believe in him or trust him enough to elect him for a second term as Clark County Sheriff, so why should you?
Laura Loomer is a conservative investigative journalist and activist. Originally from Arizona, Laura began her career working as an undercover journalist for Project Veritas from 2015-2017. She covers politics, anti-Semitism, immigration, terrorism, the Islamification of the West, and voter fraud. Loomer’s investigations have been broadcasted on every major national mainstream media outlet in the United States, as well as many international publications.