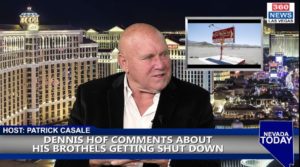 According to sources, Brothel owner Dennis Hof was discovered in his bed this morning deceased triggering a full scale investigation by the Nye County Sheriff’s office.  According to those sources, Hof’s body was air lifted to Las Vegas and is scheduled to be transferred to the Clark County Coroner for an autopsy thisafternoon.

Dennis Hof was celebrating the his 72nd birthday for the past 4 days and nights at his brothels in Carson City and Nye County. Last night Hof hosted a packed fundraiser for his campaign for Nevada State Assembly.