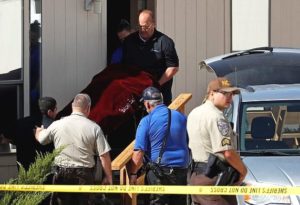 According to several sources inside Hof’s camp, Hof had a deal with investors from Dubai to dump $100 million into the Love Ranch Brothel at Crystal City Nevada to develop an airstrip big enough to handle Gulf Stream jets, with hangers and fueling services and a luxury resort with huge private bungalows. Dennis Hof died yesterday morning at the Crystal City Brothel suddenly, after attending a fundraiser the night before for his campaign for Nevada State Assembly. Hof’s money and fame made him the most dangerous man in Nevada to the political power brokers causing many to question the timing of his death.

Just the night before at his fundraiser, Hof made it clear that he intended to sue several powerful people in the County and the state for defamation and other perceived wrongs, saying “we are going to empty their wallets.” And that wasn’t an idle threat. Hof had successfully sued the Nye County government twice already in the Federal court including forcing them to return his business license in September and in June right before the primary election when a federal judge on a Saturday night forced the County government to return his A-frame campaign sign or face jail.

Hof was a multi-millionaire with a world famous business and many powerful people on speed dial, bankrolling his own campaign for Nevada State Assembly and that scared a lot of people as well. Even Roger Stone tried to persuade him to run for Governor back in January of this year. He took on and defeated a powerful sitting State Assemblyman, James Oscarson, and was weeks away from winning the general election in a landslide even after Adam Laxalt and the Republican Caucus refused to endorse him following his primary election victory in June. According to sources, his opponents were out already yesterday ripping his campaign signs out of the ground before his body was even cold.

Dennis Hof had lots of powerful enemies who wanted him gone. So when his body was flown out of town to Las Vegas and then transferred to the Clark County Coroner’s office many people started asking questions and demanding answers like Nye County Commissioner Donna Cox who wants a full investigation.