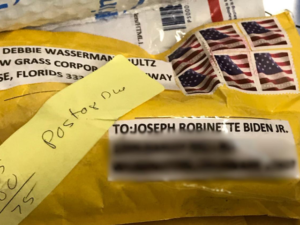 Today FBI agents arrested a suspect in the Democrat bombing scare that targeted former President Obama, Hillary Clinton, George Soros, CNN and other prominent liberals this week. There’s a little known secret in law enforcement, the U.S. Postal Service photographs every letter and every package shipped worldwide. According to law enforcement sources, the Postal Service imaging system was used in this case to focus on Florida, specifically Aventura, Florida.

The half a dozen mail bombs were shipped from that town Post office. Several of the packages went through the main U.S. postal facility in Opa-locka, which is less than 10 miles from Aventura. A 50 year old suspect in custody, originally from New York according to to reports. The FBI said the packages each consisted of a manila envelope with a bubble-wrap interior containing potentially destructive devices. The packages were addressed with a computer-printed address label and six stamps.

The FBI refused to comment on whether the bombs were live or fake meant to drive news coverage.