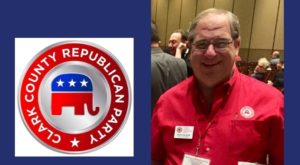 Last night, after a very rough and tumble 10 day long campaign between Acting CCRP Chairman, David Sajdak, Patrick Casale and Eddie Hamilton, CCRP “members” elected Acting Chairman David Sajdak to full Chairman of the Clark County Republican Party until the regularly scheduled vote six months from now is held. Sajdak received 97 votes, Patrick Casale received 60 votes and Eddie Hamilton received 17 votes. Last Friday night David Sajdak met with a handful of board members and they changed the rules to allow people to vote last night who would not have been allowed under the original rules. Under the original rules, CCRP members were required to attend 2 consecutive meetings in order to vote in the election last night. But we spoke with several people who voted last night who hadn’t been to a CCRP meeting in almost a year. Many were required to sign a pledge to vote for Sajdak last week.

The election was scheduled when Carl Bunce resigned after he failed to raise a single dollar since June 2018. Sajdak was his Vice Chairman.

Sajdak was elected under a cloud of controversy after it was reported that he had been arrested for Soliciting a Prostitute, which Sajdak publicly denied last night even tho, according to the arrest report, he offered the hooker $1,100 cash. He paid the Court $500 and the case was dismissed.