After Dems redistricted Congressional districts, Dina Titus lost half her district. She’s now facing brand new voters, including in Boulder City . Titus said bluntly, “They F@%k me.” For the first time since 2010, Titus may lose. So she’s throwing everything against the wall hoping to defeat Republican Mark Robertson, including outright lying about his professional records. 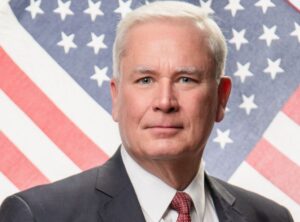 In a desperate attempt to hold onto power, Dina Titus released false and slanderous TV and print ads about her opponent Colonel (Ret.) Mark Robertson. The ads contain many falsehoods in a deliberate attempt to mislead the voters of Southern Nevada. Titus’s ads attempt to tie Robertson to a fine levied by the Securities and Exchange Commission (SEC) on Securities America. Robertson, an independent Certified Financial Planner, was never involved with any wrongdoing nor did he ever mislead any of his clients as Titus’s slanderous ads insinuate. His clients never lost one penny.  In response, the Robertson for Congress campaign has issued the following cease-and-desist letter linked here.

Dianne Steel, a longtime District Court Judge in Nevada, issued the following statement in response to the deceitful ad:

“Sad, sad, sad. Representative Dina Titus is so desperate to hold onto power that she is stooping to the most disgraceful form of dirty politics possible. She is blatantly lying to deceive and scare Nevada’s senior citizens. I served as an elected Judge in Nevada for 22 years. I’ve seen ‘public servants’ tell half-truths to keep power, but this is beyond the pale. Her campaign ad against Mark Robertson is contemptible, deceitful, and dishonest. Representative Titus is making false, misleading, and fraudulent statements about her opponent, Colonel Mark Robertson.”

“Shame on Titus for trying to exploit, deceive, and scare senior citizens.  How dare she brazenly lie about a good, honest, and trustworthy veteran.  Let’s send her a message that we will no longer tolerate her campaign lies, her proven deceit, and her dirty politics.  STOP ALREADY.”

A line-by-line rebuttal can be found here.

The full transcripts of the SEC filing can be found here and here.

See Mark Robertson’s spotless FINRA record. You can see that he had zero disclosures which can be customer complaints or arbitrations, regulatory actions, employment terminations, bankruptcy filings, or certain civil or criminal proceedings.