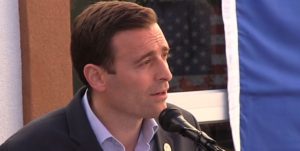 The Republican Assembly Caucus issued the following statement “The Assembly Republican Caucus will not endorse or support any candidate in Assembly District 36.”

Laxalt didn’t speak out when Oscarson was accused of alleged sexual misconduct as Chairman of the Health and Human Services Committee last month.

In 2015 the Nye County Republican Party excommunicated him in a very public proclamation.

Hof has been in the national headlines after defeating 3 term Republican Assemblyman James Oscarson in last week’s primary election. Hof owns several legal brothels in Nevada and was the star of a highly successful reality TV show on HBO about his Brothel.

Dennis Hof said in a statement to 360 “I did not seek the endorsement of the Republican Caucus because of the number establishment owned tax hikers. The only endorsement I want is from the voters of Assembly District 36.”