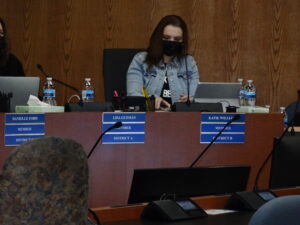 Katie Williams is rumored to be a Republican candidate for the state senate. Katie Williams ran for the Clark County School Board just four short years ago, claiming to be a Trump Republican committed to Republican principles. According to beauty contest organizers, Katie lied to the public on her website when she claimed

“In 2019, I was set to compete in the Miss America pageant until I was stripped of my title and disqualified from the pageant because I voiced my conservative beliefs.

Unfortunately, conservative values are not just under attack in the pageant world; they are under attack everywhere. In no place is that attack more present than within America’s public schools. That’s why I chose to run for the Clark County School Board and bring a new, common sense conservative voice to the table.”

But the fake controversy helped blast her name into the headlines and helped get her elected to the School Board as the only Republican. I spoke with the president of the beauty pageant, who denied that Katie was fired because she was a “conservative.” Instead, she was fired for wearing her Ms. Nevada sash while also wearing a MAGA hat, a clear rule violation.

Now 360 News has uncovered that Katie Williams has been working for the last year for the far left woke lobbying firm Agile City, which could be an ethics violation. 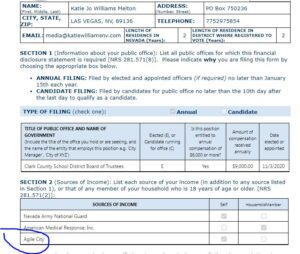 In this video found on the far Left woke California based group, Agile City’s website, the group touts using the pandemic to get rid of gas cars to promote “equity”. 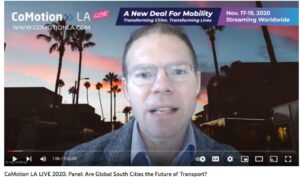 Katie Williams is only paid $9,000 a year to be a CCSD Trustee and also works for the Nevada Army National Guard.

Katie may have violated Nevada ethics law by working for a lobbying firm while in elected office if she failed to recuse herself in matters before the Trustees that Agile City advocated for, like the recent purchase of electric school buses.

NRS 281A.400(4) Accepting any salary, retainer, augmentation, expense allowance, or other compensation from any private source for yourself or any person to whom you have a commitment in a private capacity for the performance of your duties as a public officer or employee.

Once again, Republicans voted for a supposed conservative only to find out later that she is just another politician willing to say anything to get elected. I fully supported Active Army Reservist Katie Williams, who campaigned as a rock solid conservative but has governed in concert with radical socialists Lola Brooks on the CCSD school board.

Katie Williams cast the deciding vote with Bernie Sanders Socialist Lola Brooks to retain Superintendent Jara and give him a $75,000 raise, moving his salary up from $320,000 to $395,000 and extending his contract for 3.5 years. Katie Williams voted in support of Jara’s job evaluation as “highly effective.”

According to folks in the know, Katie may have given Jara more than one kind of raise after promising to get rid of him. She also skipped the vote for the Vax mandate after railing against the JAB on social media. It turns out she’s vaccinated. BTW she was facing a planned recall by voters after her vote for Jara’s million-dollar pay raise. Of course, Katie officially denies any affair with Dr. Jara.