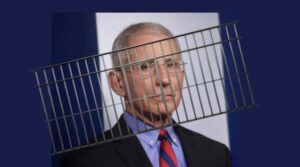 After thousands of Fauci emails came to light this week, it’s clear that Fauci intentionally misled the country about a host of things that may have caused the deaths of thousands of Americans. Fauci’s emails reveal he knew hydroxychloroquine may be a possible cure for Cv19. Fauci knew fabric masks did nothing to protect people from CV19. Fauci knew that China was covering up the origins of CV19. Facui knew the risks of CV19 back in January as thousands of Chinese went to a convention in Las Vegas for the CES show.

According to Fox News reports, Fauci and the U.S. State Department quashed an investigation into the Wuhan Lab. Fauci, with the help of Facebook, quashed questions about the origins of CV19. This was a concerted effort to cover up U.S. funding and Communist Chinese Corruption. The cover up slowed efforts to find a cure. In addition, Fauci sought to cover up the dangerous research his agency was funding in the Communist Chinese bio weapons lab.

After all that, Fauci repeatedly and intentionally misled the public from the very beginning, even possibly lying to Congress.

All of this adds up to criminal negligence and possibly manslaughter times 600K. But don’t hold your breath waiting for the Biden Justice Department to pursue any charges against Fauci, let alone conduct a fair investigation. But the Attorney Generals of Texas and Florida certainly have the legal authority to investigate the CV19 deaths of Texas and Florida citizens.

It’s time for a Texas Grand Jury to consider all the evidence, hear testimony and subpoena witnesses and documents. It’s time for real justice.