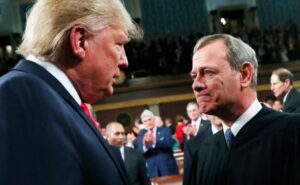 This month Roberts ruled that Churches can be shut down and kept shut down so long as they are treated exactly like movie theaters and other similar gathering and businesses completely ignoring the 1st Amendment that raises religious organizations above petty local laws. He went on to say that local state elected officials can do what they want and violate our rights because we voted them in and we can vote them out. But the USA is not a democracy. We are a constitutional republic that guarantees the rights of individuals against the tyranny of the majority.

Roberts refused to hear cases challenging states that are violating the 2nd Amendment. Roberts refuses to hear cases about Big tech companies violating free speech. But just this week Roberts’ court discovered in Title VII of the Civil Rights Act of 1964, which makes it illegal for employers to discriminate because of a person’s sex, also covers sexual orientation and transgender status. Roberts literally added that to a 55 year old law that never actually said or intended to say transgender rights are covered by the federal law. He literally wrote it into the law.

Roberts was the deciding vote in favor of Obamacare claiming elected officials have the power to levy taxes even though the Obama administration argued the act it wasn’t a tax. Roberts ruled that illegal aliens can be counted in this year’s Census. The Census determines how many members of Congress each state gets. Counting illegal aliens skews the count in favor of blue states like California. His court granted rights to foreigners living in caves seeking asylum in the US. His court found a right for gays to get married.

If you believe that gays should have the right to marry and have employment rights under the law, then write laws and pass them through the legislatures.

Roberts has become a dictator governing from his life-long perch position completely unaccountable for his own corruption and misdeeds. Roberts misled those who supported his appointment years ago. Supreme Court Justices are appointed by the party in power and as such are an extension of the will of the people. But when a politician dressed up like a judge campaigns for his appointment, then sits before the U.S. Senate swearing his allegiance to the principles of limited constitutional governance and opposing legislating from the bench; we should be able to hold him accountable. Roberts’ corruption now threatens our society and our country’s future. His rulings are based in politics and not on the constitution. The basis of his decisions flip flop like a decapitated chicken.

Roberts must be impeached for defrauding the American people. Roberts has become a grave threat to our Republic. He must be removed, replaced and or neutralized by the U.S. Senate and the Executive branch. After-all Roberts doesn’t command police or military troops. Roberts still must rely on congress to fund and the President to command law enforcement. Congress and the President’s allegiance to the Constitution demands that his rulings be declared null and void and refuse to enforce his rogue rulings. They must demand that he steps down. Congress and the Executive Branch should remove the police and defund the Supreme Court. They must be the check and balance on this Rogue Dictator.

This is not just political rhetoric. The Supreme Court is supposed to protect the people’s rights against local, state and federal governments. Lincoln ignored the Supreme Court in his day and crushed the Democrat led Civil War. We are in a new civil war with Democrats who seek to remake the Country through the courts when they cannot win at the ballot box. President Trump and Congress cannot let Roberts continue to destroy our civil society. Roberts clearly is more concerned with what history books will say about him 100 years from now more than what we say about him today. Roberts has become our worst nightmare.