NV Teachers Loosing Nearly $7,700 a Year to Pay for other People’s Retirement 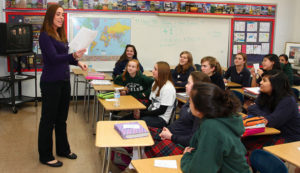 Beginning this July, contribution rates to the state Public Employees’ Retirement System will increase to 29.25 percent of salary, an all-time high.

This means that for every $10,000 spent on teacher salaries, Nevada school districts must send an additional $2,925 to PERS.

Although school districts pay the full amount to PERS directly, teachers are responsible for paying half of this cost through an equivalent reduction in their salary. This arrangement explains why teacher complaints over rising rates was a topic of frequent discussion at several PERS board meetings in 2015 — the last time the System raised rates and thus decreased teacher salaries accordingly.

So what will teachers get in exchange for the upcoming rate hike?

Just like the several rate hikes that preceded it, this upcoming rate hike is going entirely towards paying down the system’s record-high $13.7 billion unfunded liability.

This debt reflects the System’s failure to fully fund the pensions of earlier workers, a cost that is now being borne by today’s taxpayers and public employees.

Comparing the change in PERS contribution rates from 2009-2019, as shown in the chart below, demonstrates that the entirety of the past decade’s rate hikes have gone towards debt, not the teacher responsible for paying these costs: The normal cost represents the amount spent on pre-funding the employee’s future benefit, whereas the unfunded liability portion is the amount that goes towards paying down the System’s debt.

As the chart makes clear, all of the rate hikes that have occurred over the past decade have gone towards paying down PERS debt, which provides no benefit of any kind to the teacher, taxpayer and public employer responsible for paying this cost.

The debt component is now so large that 45 percent of what Nevada teachers will pay to PERS next year will go towards funding other people’s retirement, rather than their own, future benefit:

With an estimated annual salary of $58,985[1], just the debt portion of PERS costs — which are used exclusively to pay for other people’s retirement — will cost the average Nevada teacher $7,680 next year: But that’s not even the worst of it.

Compounding this inequity is the fact that recent and future hires will receive significantly reduced benefits as compared to those whose pensions they are now being forced to help pay for.

As the chart below shows, the past decade’s explosion in PERS costs has occurred alongside two separate benefit cuts for new hires: The burden of paying down PERS soaring debt has made all parties worse off. New teachers are being forced to pay more, while getting less, as employers struggle to attract qualified applicants with such an unappealing retirement plan.

Avoiding this lose-lose situation is precisely why so many, for so long, have called on lawmakers to enact PERS reform.

Sadly, in attempting to defend the status quo, some government officials have misled the public about the cost associated with PERS unfunded liability.

Take, for example, comments made by PERS Executive Officer Tina Leiss, who sought to diminish concerns over the System’s soaring debt by reportedly claiming that the idea of a “taxpayer bailout is not supported by any facts.”

In reality, PERS has been receiving a bailout from taxpayers and teachers for at least the past ten years, and explicitly intends to further that trend going forward.

It is particularly worrying that such a large bailout was necessary during a period of exceptional stock market returns, which saw PERS significantly outperform expectations over the past ten years.

This means that, while they may not be aware of it, Nevada public employees and taxpayers are heavily invested in the stock market continuing its record-long bull run. Should the economy fall into recession, taxpayers and teachers will see their PERS costs soar when they can least afford it:

Rather than waiting until the problem becomes too large to ignore, the Legislature should reform PERS now, and implement a retirement system where members receive the full benefit of their contributions, rather than being forced to pay for other people’s retirement.

Passing former State Controller Ron Knecht’s AB75 and SB83 would be a great step in that direction. But those proposals are hardly the only viable reform options. Even reform options that stay within the defined-benefit structure of PERS, like a cash-balance plan, would be a significant improvement over the status quo.