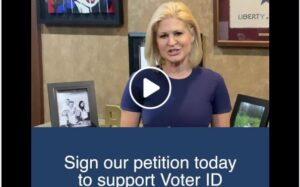 Very few Republicans seem willing these days to fight voter fraud publicly in light of the media and Democrat attacks labeling such policies as “racist”. Big Tech de-platforms anyone who dares to claim the November election had any voter fraud issues. But April Becker may know better than most. April was ahead in her State Senate election vote count for days after the election, before one morning she wasn’t. By Friday she was down by 600 votes.

April Becker’s attorney filed a Writ of Mandate seeking a new election based on multiple unexplainable irregularities in her election. April’s Writ outlined extensive corruption by Joe Gloria and the Democrats in the county elections department, including;#1. Violating federal and state election laws by failing to remove thousands of inactive voters whose ballots were returned as undeliverable in the June primary.

April actually canvassed her district finding 57 votes cast by folks who moved away from the homes where the mail-in ballots were sent. But, the current residents claimed in sworn statements that they never received the mail-in ballots for the prior residents. So how did those ballots get counted?