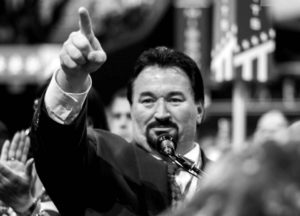 Clark County Republican Party, last night saw two slates running on a message on unity and that’s what they got. Carl Bunce ran for Chairman along with Jo McDonald (wife of NV State GOP Chairman Mike McDonald) as his number 2, ran against Eddy Facey for Chairmen and David Sajdak for Vice Chairman.

Even though Facey and Bunce ran on slates, the Clark County GOP voted for who they wanted and who they didn’t want. Bunce won Chairman but Jo McDonald lost the vice Chair position. Chairman Bunce will have Sajdak as his Vice Chairman. Many people in the party privately expressed concerns about Jo McDonald being the wife of the State Party Chairman, Mike McDonald, along with her combative attitude displayed all last year publically towards the previous chairman Dwight Mazzone. But Jo’s husband didn’t go away quietly last night. 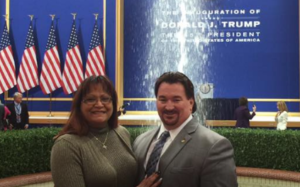 The Nevada State GOP Chairman Mike McDonald lashed out at the microphone after the vote tally that handed Jo a surprise defeat. His public anger was directed at the opposition who sent out email blasts about Jo McDonald being part of a “Crew” bent on disruption and chaos. Mike then went on to say the White House had sent observers to the county party election and that they had embarrassed themselves in front of the White House. Mike went on to say that because Bunce won, Steve Wynn was going to now contribute $20,000 to the GOP County Party. Of course this lead to people in the audience yelling back at Mike that he was out of order.

Mike McDonald is up next for re-election as Nevada State GOP Chairman. He has tied himself to President Trump. But last year after the Nevada GOP received over $5 million in donations, the NV GOP still lost every major and most of the minor elected seats in the state. Joe Heck’s defection from Trump certainly didn’t help. But the NV GOP has failed to support and grow the voter registration rolls under McDonald’s leadership. Even this year, the Democrats have added an additional 3% lead in statewide voter registration numbers. Today, there still is not real plan in the Republican County or State Party to reverse the voter registration numbers.

So Jo McDonald’s loss is seen by many as a warning shot across the bow of Chairman Mike McDonald to get it in gear or get replaced. In politics you are only as good as your last win. And often people are blamed for losses that are not their fault. Mike McDonald is energetic and charismatic but he has failed to build a political machine to compete with Harry Reid and the Democrats resulting in historic losses at the ballot box. If the election last night at the Clark County GOP was ultimately about Mike McDonald then he needs to double his efforts to turn around the party’s death spiral from last year’s election or he will soon be the past Chairman.