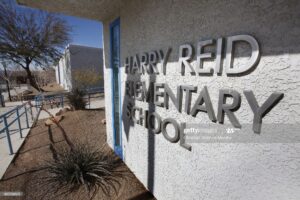 If Harry Reid was a Republican, Black Lives Matter and the rest of the Antifa Dems would have agitated to tear Reid’s legacy down long ago. One only needs to scan Reid’s speeches on YouTube to see his racist remarks about immigrants and even Pres. Obama. Let’s be clear, racist as Black Lives Matter defines it; meaning anything critical of their agenda, even if it was said in the 1980’s or even in the 1780’s.

As we can see from recent history, when Reid said Obama had a real shot at the Presidency because he is a “light skinned African American” “without a negro dialect” was brushed off by the same folks who today are tearing down statutes and demanding political correct purity.

Behind the scenes, many of the young up and coming Democrats admit and express their disdain for his racism and reject him as the leader who will define the Democrat’s future. Reid is nowhere radical enough for the new Democrat socialists in Nevada who voted for Bernie Sanders in droves just a few months ago.

But give the Black Lives Matter Mobs time. BLM are the modern day French revolutionaries cutting off the heads of their perceived enemies. And when they finish killing their memories off, their blood lust will push them to come after Reid and his generation of Democrat leaders.

Even though Reid and I are diametrically opposed to each other’s polices, Reid has helped lead the state out the wilderness and helped turn Las Vegas and Nevada into an economic powerhouse. He deserves to have an elementary school in Search Light named after him. We must defend all our history, not wipe it out. That’s what makes America the greatest country on Earth.