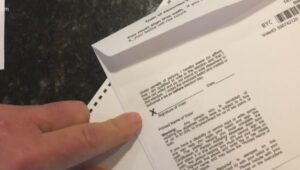 The all mail-in-ballot primary election saw a 50% increase in turn out state wide. But mail-in-ballots have been extremely controversial from the start for many reason. But now voters have a new reason to be very concerned.

10,799 ballots were tossed statewide out of 490,000 cast because their signatures did not match or could not be confirmed according to Clark County Elections and other counties. To put that in perspective, Hillary only won the Nevada general election in 2016 by some 27,000 votes out of 1,125,385 total votes cast. If mail-in-ballots are allowed to be used in the general election in November this year, and there are no fixes to the signature verification system, then we can expect a possible 2000 election Florida mess. The mail-in-ballots took almost two weeks to count and verify this month. There has been no independent audit of those votes tossed. The name and party of the votes tossed are printed on the ballot received by the elections department.

Imagine no winner declared for 2 weeks after the general election this fall. And imagine the possible fraud when Dems have two weeks to ballot harvest. But Dems never let a crisis go to waste. They’re seeking to remove signatures from the mail-in-ballots altogether.

711 lady, Nevada Secretary of State Barbara Cegavske had no comment as usual.