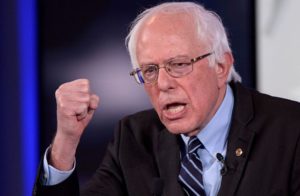 Democrats have called for “common sense” gun laws for years while pretending they desire maintaining most gun rights in the process. But the mask has come off and the Democrats are now openly calling for a total ban of firearms. This week, Democratic Socialist Bernie Sanders openly called for a total gun ban like New Zealand. And he’s not the only Democrat.

Behind closed doors, Democrats have often desired a total gun ban in America but they feared the NRA and their history of turning out any politician who dared go against them. But after the NRA was shellacked by Michael Bloomberg in the 2018 elections, Democrats feel empowered now to come out for a full ban on most guns.

This last week Bernie Sanders and other candidates running for President on the Democratic ticket were mostly in agreement and now support a full ban on most guns, including rifles and semi-automatic hand guns. Bernie Sanders tweeted out:

“This is what real action to stop gun violence looks like. We must follow New Zealand’s lead, take on the NRA and ban the sale and distribution of assault weapons in the United States.”

As Nevadans watch the Democrat controlled legislature strip law abiding citizens of their gun rights while at the same time lowering most crimes in the state down from felonies to misdemeanors and failing to prosecute actual felons who attempt to purchase a firearm, Bernie Sanders has exposed the Democrats true goal, a TOTAL GUN BAN.