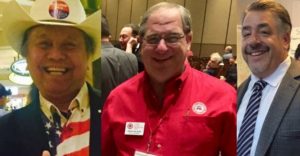 Patrick Casale is facing off against Vice Chairman David Sadjak and Eddie Hamilton. Carl Bunce resigned after failing to raise a single dollar since June 2018 in the midterm elections resulting in a disastrous result for Clark County Republicans.

Patrick Casale is a small business owner who operates an insurance company. Casale has pledged to build a professional staffed political machine out of the rubble of CCRP. Casale pledged to raise over $250,000 for the CCRP if elected Chairman.

Eddie Hamilton is an investor who has ran for multiple offices over the years, never winning any, but he has pledged also to rebuild the party as the Trump Party.

David Sadjak was Vice Chairman under Carl Bunce. Sadjak has said it wasn’t his responsibility as Vice Chairman to raise money and he should not be blamed for the CCRP raising ZERO dollars since June 2018. He has pledged to move forward by reaching out to outside groups.

The winner of tomorrow’s race will have to stand for election again in July 2019 when the CCRP holds it regularly scheduled elections for leadership.