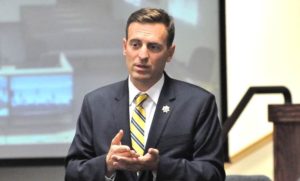 This Monday, October 2, 2017, Adam Laxalt’s website says he wants to “share some exciting news!” The event starts at 10 am and is open to the public at Brady Industries located at 7055 South Lindell Rd Las Vegas, NV.

Attorney General Laxalt has been angling for over two years to run for Governor of Nevada on issues like Question 1 the gun background check law that he blocked and fighting the Obama Administration on a host of issues including land reforms.

Clark County Commissioner Steve Sisolak is also in the race although not officially yet. Dan Swartz, Nevada Treasurer, announced earlier this month he too is running. Newcomer and business owner Jared Fisher is also running in the Republican Primary and his kickoff ‘Working Tour” on a Food Truck at the Great American Foodie Fest in Henderson serving gyros and salads in Henderson and the Sunset Casino starts today.