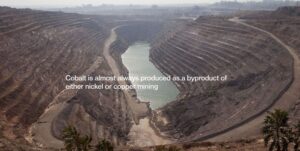 Democrats’ secret plan is, most folks won’t own a car in the future, they’ll ride in autonomous EV cars.

As California hits its predictably summer temperatures, Democrats citing Climate Change are pushing universally electric cars and the demise of the combustion engine even though electric companies are now begging folks to reduce their energy consumption by not charging their EV cars. But electricity may be the least of our worries with the prospect of universally electric cars. Cobalt is a critical element in the production of lithium batteries used in Electric cars.

Mined by mostly Chinese Companies, in the Democratic Republic of Congo, Canada or Morocco, cobalt-containing batteries are critical to companies from Samsung Electronics Co. to Volkswagen AG.

China now controls essentially 100% of the Cobalt world market. As noted in this report in Bloomberg back in 2018, China was gobbling up Cobalt mines and the companies that process it. If America were to go all EV, China would be the sole source of Cobalt today.

Democrat leaders who push electric cars have no answer for this and other related supply chain issues for the development and production of electric cars.  To say the Democrats are in the back pocket of the Communist Chinese Government is an understatement. Democrats like Sisolak, Biden and Newsom are essentially Chinese assets clearly doing their bidding. They know these facts yet they continue to push China’s policies of electric cars intentionally.

The Biden Pentagon is even pursuing electric tanks and planes.

China wants the U.S. to replace its gas and diesel

1. To put us at a competitive disadvantage and

2. They’ll have a strangle hold on the U.S. economy.

Sisolak has allowed China to buy up Nevada mining interests along with Nevada farm land and water rights. China now owns over 44k single family homes in Nevada, making the Chinese the largest landlord in Nevada. They now own, through Blackrock, many MGM casino hotels on the strip. Sisolak bought 588K PPE gear from the Chinese instead of from American companies.

CV19 and the war in Ukraine have proven the failure of globalism creating massive disruptions in supply chains. America must be energy independent to be truly free, which means oil and gas, not Chinese Cobalt EV cars for the few.

Its clear that those in power don’t have America’s best interests at heart. Nevada needs to elect Adam Laxalt, April Becker, Sam Peters and Mark Robertson to Congress this November to protect our economic freedom and independence from China and the Democrat Party.