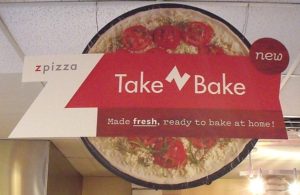 Devin Jeran, an employee at Z Pizza in Seattle, was stoked to get a raise, from $11 to $15 an hour as part of a new law that takes effect today.

He was happy to get a raise, when Seattle’s minimum wage went up to $11 an hour at the beginning of the month.

“I definitely recognize that having more money is important,” he told local TV station Q13-Fox, “especially in a city as expensive as this one.”

But that didn’t last long. “Unfortunately, he’ll only enjoy that bigger paycheck for a few more months. In August, his boss is shutting down Z Pizza and putting him and his 11 co-workers out of work,” the station reported.

Today, across the country, workers are striking. Some 21,000 AT&T Wireless workers were expected to walk off the job, WZVN reports. And the protests occurred around the world as workers demanded better pay and better working conditions, ABC reported.

But for Jeran, things are going to get worse, Red Alert Politics reports.

Small businesses in Seattle have up to six more years to phase in the new $15 an hour minimum wage, but even though she only has 12 employees, Z Pizza counts as part of a “large business franchise.” As a result, she is on a sped up timeline to implement the full raise.

“I know that I would have stayed here if I had 7 years, just like everyone else, if I had an even playing field,” she said. “The discrimination I’m feeling right now against my small business makes me not want to stay and do anything in Seattle.”

The organization that pushed for the higher minimum wage, 15 Now Seattle, wouldn’t comment directly on the closing to Q13 and didn’t offer any sign of sympathy.

But it hasn’t helped Jeran.

Jeran wonders about all the rallies that were supposed to be about making life better for people like him.

“If that’s the truth, I don’t think that’s very apparent. People like me are finding themselves in a tougher situation than ever.”

Shah Burnham is concerned about where her employees will end up when she does close.

“I absolutely am terrified for them. I have no idea where they’re going to find jobs, because if I’m cutting hours, I imagine everyone is across the board.”