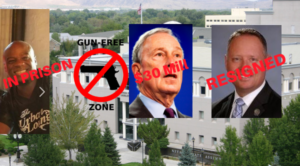 Many people worried about how far the Democrats would go if they took over all three branches of the Nevada State Government. We now have our answer. After Gov. Sisolak promised a more moderate tone and approach to governing, the Nevada Democrats went wingnut left. But the Democrats also made history when the Nevada Democratic Senate Majority Leader, Senator Kevin Atkinson plead guilty in Federal Court to misusing $250,000 of campaign cash to finance a luxury car lease and a gay night club business. And the Nevada media forgot to mention Democrat and Majority Whip, Assemblymen Mark Sprinkle resigned from the State legislature amid sexual harassment complaints. The Democrats ascended to power with $30 million dollars from Michael Bloomberg only to use that new found power to strip law abiding Nevadan’s gun rights away sparking an uprising backed by over 14 Nevada Sheriffs who now refuse to enforce the unconstitutional gun laws.

Democrats ignored the Nevada State and U.S. Constitution when they passed the most radical guns in 160 years.

Democrats ignored the Nevada State Constitution when they passed a business tax without the 2/3 majority required.

Democrats passed the most immoral baby killing law ever, stripping even the most reasonable limits now allowing 13 years old to abort their baby without a parent’s consent.

Democrats funded a new State government bureaucracy to aid illegal aliens to get welfare and other government benefits.

Democrats throw out due process and gave the courts unlimited power to seize citizen’s guns when they passed the new Red Flag law.

Democrats passed AB397, a new sexual harassment law, but the lawmakers excluded themselves.