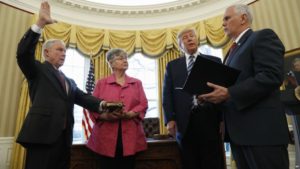 US Attorney General Jeff Sessions said today in a speech before border agents:

The President has made this a priority — and already we are seeing the results. From January to February of this year, illegal crossings dropped by 40 percent, which was unprecedented. Then, last month, we saw a 72 percent drop compared to the month before the President was inaugurated. That’s the lowest monthly figure for at least 17 years.

This is no accident. This is what happens when you have a President who understands the threat, who is not afraid to publically identify the threat and stand up to it, and who makes clear to law enforcement that the leadership of their country finally has their back. Together, we will drastically reduce the danger posed by criminal aliens, gang members and cartel henchmen.

To that end, the President and I want to do our best to arm you, and the prosecutors who partner with you, with more tools in your fight against criminal aliens. So today, I am pleased to stand here with you and announce new guidance regarding our commitment to criminal immigration enforcement. As we speak, I am issuing a document to all federal prosecutors that mandates the prioritization of such enforcement.

Starting today, federal prosecutors are now required to consider for prosecution all of the following offenses: