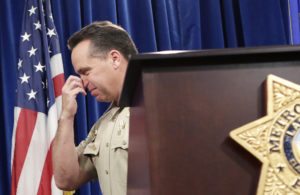 While the Median Income of the average family in Nevada Assembly District 13 is $77,532, according to public demographics published by State of Nevada, and the median home value in Las Vegas is $247,700 according to Zillow, Metro Officer and Candidate for AD13 took home over $316,000 in 2017.

Local voters who learned how much Metro Officer Tom Roberts earned in 2017, $316,000 in total pay and benefits they were shocked. According to NPRI’s website, http://transparentnevada.com Officer Roberts has seen a 30% increase in compensation over the last 2 years.

If Metro Officer Tom Roberts, whose about 50 yrs. old, retires today, he can expect to take home well over $250,000 a year for life, that’s $5 million over the next twenty years. Metro Officers participate in the Nevada State retirement system called PERS. As of 2016, PERS had $34.6 billion in assets but still owed $12.56 billion more in benefits. Nevada taxpayers are on the hook for the difference. And with huge payouts like Roberts is now set to receive, the system is only expected to grow more in debt.

Roberts is officially running for the Nevada State Assembly for District 13 in a winner take all Republican primary, the winner of which will be the next Assemblyman. The Democrats failed to put up a candidate in that race. If Roberts wins, under current State law, he can double dip and accept another government salary as an Assemblyman on top of his $250K annual pension payout.

Roberts is an Assistant Sheriff at LVMPD covering technology, Homeland Security and a host of other responsibilities. Roberts, works very closely with Sheriff Lombardo and is considered a close ally. 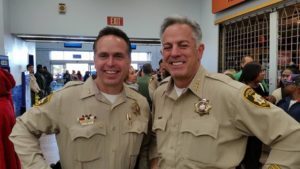 In 2016, Roberts fully supported Lombardo’s efforts in the State legislature lobbing to raise the Clark County Sales tax called the “more cops tax” saying the money was needed to hire more cops to fight the surge in crime. After Lombardo and Roberts broke up the gang unit in 2015, violent crime surged. Clark County saw an 80% spike in murders in 2016, the highest on record in the last 30 years. Lombardo and Roberts promised the tax increase would go to pay for more cops and not into salary increases.

Sanson has championed Veterans’ issues as President of Veterans in Politics International and recently took up the fight to reform Family Court, calling for the right to a jury trial instead of mandatory bench (judge) trials. “A family court judge can take away your kids, your home, your money and your freedom. The right to a jury trial is guaranteed in the 7th Amendment of the U.S. Constitution”, according to Sanson. Sanson is also advocating for several reforms to protect Veterans’ rights as well in his campaign. Sanson said he will sign The Tax Payer Protection Pledge, vowing not to raise taxes “period”, while Roberts has refused to sign the pledge to date.

We could not find a campaign website for James Kemp.