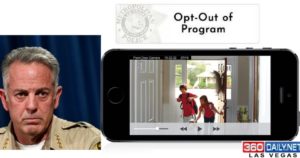 According to the user agreements in many of the popular home wireless camera security systems, home owners are automatically opted in allowing local police access to your wireless security cameras outside and inside your home without providing the homeowner any notice or obtaining a warrant.

See below, on the Las Vegas Metro Police website there is an opt out page where citizens can go and opt out of the police surveillance system which can accesses your home wireless camera system without your expressed consent. 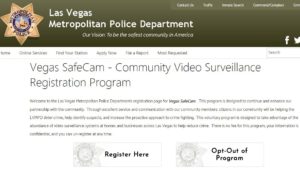 Over the New Year’s Eve holiday, Sheriff Lombardo revealed a program in which police can spy on Uber passengers. All the Uber passengers we asked were unaware that the police could spy on them inside Uber cars and hear and see everything they say and do. Lombardo used the Oct.1 Mass Shooting as justification for the spying.

Lomabrdo’s department has Licenses plate camera readers all across the valley tracking every car on the road. Metro has built an entire intelligence division that Lombardo controls without any oversight. When asked about these programs Lombardo lawyers sounded like the NSA, claiming if they were forced to provide information to the public it could compromise sources and methods. There is no civilian accountability and we all know where that leads. 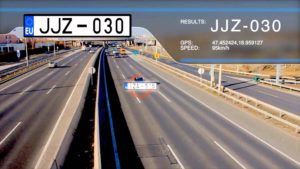 As reported by a government watchdog group recently:

The information captured by the readers – including the license plate number, and the date, time, and location of every scan – is being collected and sometimes pooled into regional sharing systems. As a result, enormous databases of innocent motorists’ location information are growing rapidly. This information is often retained for years or even indefinitely, with few or no restrictions to protect privacy rights.

In July 2012, ACLU affiliates in 38 states and Washington sent public records act requests to almost 600 local and state police departments, as well as other state and federal agencies, to obtain information on how these agencies use license plate readers. In response, we received 26,000 pages of documents detailing the use of the technology around the country. Click on the map icon on the right to learn how police in your state use license plate readers to track people’s movements.

The documents paint a startling picture of a technology deployed with too few rules that is becoming a tool for mass routine location tracking and surveillance. License plate readers can serve a legitimate law enforcement purpose when they alert police to the location of a car associated with a criminal investigation. But such instances account for a tiny fraction of license plate scans, and too many police departments are storing millions of records about innocent drivers. Moreover, private companies are also using license plate readers and sharing the information they collect with police with little or no oversight or privacy protections. A lack of regulation means that policies governing how long our location data is kept vary widely.

Automatic license plate readers have the potential to create permanent records of virtually everywhere any of us has driven, radically transforming the consequences of leaving home to pursue private life, and opening up many opportunities for abuse.

The fact is your privacy has been stolen from you by every level of government, from the water department knowing the exact time of the day you turn on and off your water, the power company knowing when you are home, to the local police tracking your every move through on board GPS systems in every new car. We have surrendered our privacy without even knowing it through opt out user agreements like the ones on Facebook and home wireless cameras security systems we were convince to purchase to protect our homes. We paid for home security systems trying to protect our homes from being robbed never imaging our government would use those wireless home cameras to rob us of our privacy and dignity.

Lombardo must be held accountable on Election Day, June 12, 2018, for abusing the privacy every citizen in Clark County. We the people, still hold the power to dispose of elected officials who abuse the trust they are afforded.