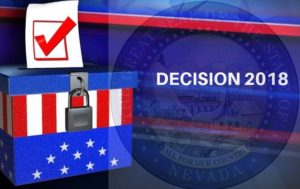 2018 has seen a Presidential year level voter turnout with over 628,000 people voting so far in Nevada. What’s really striking is how many “Other’ voters turned out. Democrats turned out more than 260,000 voters and Republicans turned out 22,000 less voters, about 238,000, more than 130,000 “Other” voters came out so far. While many political pundits are already writing off the Republicans this cycle here in Nevada, historically Republicans prefer to vote on election day. So right now it’s all out GOTV (get out the vote).

But the real story may be the 130,000 plus “Other” voters may close the gap for Republicans since many are disenfranchised Republicans who’ve been turned off in recent years by RINO’s like Sandoval raising taxes and giving driver’s licenses to illegal aliens. IAP and Libertarians make up a large portion of those categorized as “Other” voters. Many of those disenfranchised Republicans, now “Other”, voters fear losing their guns rights if Sisolak is elected governor. There has been a huge push on social media to urge people leaning towards Ryan Bundy and others to vote for Laxalt and save Nevada from becoming California. “Other” voters make up over 20% of the early voter turn out so far.

But the other real challenge is Nevada’s dirty voter rolls. According to the Clark County Registrar of Voters, they do not screen out green card holders, illegal aliens and felons. According to a letter received from that office, they operate on the honor system and do not screen voter registration forms from the DMV. In addition the DMV’s computer system cannot flag felons and green card holders when transmitting voter registration forms to the Secretary of State and County Registrar of Voter’s offices.

So don’t be surprised if Laxalt pulls it off with the help of “Other” voters many of whom support President Trump. But all those “Other” voters may be offset by illegal voters who, according to a 360 News Report earlier this year, number up to 50,000. 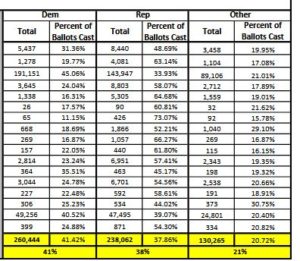