$250K APRIL BECKER ONE OF THE TOP CONGRESSIONAL CHALLENGERS IN AMERICA

$250K APRIL BECKER ONE OF THE TOP CONGRESSIONAL CHALLENGERS IN AMERICA 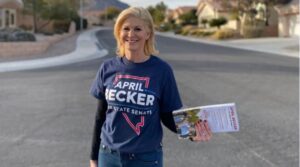 Republican Candidate for Nevada’s 3rd Congressional District, April Becker, will top $250,000 in fundraising when she files her official report with the FEC later this week. Her support comes from all 50 states and April now has more than 3,000 individual donors. April’s folks say she’s on track to reach more than 10,000 donors by year’s end. By comparison, Dan Rodimer hit 10,000 donors far later in his race for CD3.

In May 2021, out of about 100 Congressional Districts the Republican Congressional Committee is targeting this election cycle, April Becker came in 4th in the Nation in campaign fundraising. April raised $143,444 with most of the money coming from individuals.

CD3 is a must win for the GOP if they’re going to take back the House next year. CD3 has been a swing district since redistricting back in 2010. Dina Titus held it for just 2 years then Joe Heck held it for 6 years and then the district swung back to Susie Lee 3 years ago.

April Becker has taken tough positions that some of her opponents have refused to, like supporting impeaching Joe Biden after 13 U.S. Marines were murdered by a suicide bomber released by Biden in his botch Afghanistan pull out or coming out for voter ID.