10 ETHICS CHARGES! DID DR. JARA UNLAWFULLY GET HIS SON A JOB WITH THE UNION?

10 ETHICS CHARGES! DID DR. JARA UNLAWFULLY GET HIS SON A JOB WITH THE UNION? 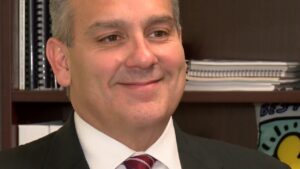 As Clark County School District Superintendent Dr. Jara faces another vote to oust him this Thursday, more information about his alleged corruption is coming to light. According to an Ethics Complaint filed against Dr. Jara in May 2020 by Trustee Danielle Ford, Jara used his office to game the system to help his son get a job allegedly violating over 10 laws in the process. Will Trustees Katie Williams and Irene Cepeda continue to support Dr. Jara, even after his disastrous performance this year? They refuse to comment right now.

A local parent responded to Jara saying “Perhaps he needs to put the parents and the Trustees who employee him first?”

Dr. Jara a violated NRS Chapter 281A in several ways using
his position as the Superintendent of the Clark County School District to
attempt to influence the upcoming CCSD Board Trustee Election(s),
specifically the election presently taking place in District B where Jeff
Proffitt, the business manager of Sheet Metal Workers Local 88, is
running for a Trustee seat. I further allege Dr. Jara used his position to
gain employment for his immediate family, specifically his son, who I
believe presently resides in Jesus Jara’s home. Some facts and
circumstances supporting my allegations are as follows: – During the
period of mid – late 2019 Dr. Jara used Patrick McNaught of GP
partnerships, the contracted lobbying firm for CCSD, to gain entry for
his son into the Local 88 apprenticeship program. Local 88 is also a
client of GP partnerships. – In the beginning of 2020 Dr. Jaras’ son was
terminated for unknown reasons leading Dr. Jara to having a falling out
with Jeff Proffitt, Business Manager of Local 88, claiming his son was
treated unfairly. – When election season started, Jeff Proffitt filed for
CCSD Trustee candidacy. When Dr. Jara learned Mr. Proffitt was
running, he directed Patrick McNaught (GP partnerships, a contracted
firm of CCSD) to meet with Mr. Proffitt to obtain information about his
race. The benefit for Dr. Jara doing this is to obtain information
regarding Mr. Proffitt’s political motives, if he would support Dr Jaras
contract renewal that happens in 2021, and potentially other upcoming CCSD items of interest. – Mr. McNaught sent reports that included
“Trustee Races” as one of CCSD’s lobbying priorities and cited in the
activities report that the meeting with Profitt was about his Trustee race.
– In March of 2020 GP partnerships was terminated by Dr. Jara even
though the contract wasn’t fulfilled, and without explanation. In
summary, I believe there is enough evidence to support that Dr. Jara
knowingly violated several sections of NRS 281A using taxpayer
resources for his own political and personal gain: 1) Helping a family
member to obtain employment, and 2) using a CCSD contracted
lobbyist to influence a political election, one that in this case literally
elects one of his seven bosses. There is also enough circumstantial
evidence to support that Dr. Jara may have directed CCSD staff to alter
the records on file from GP partnerships so as to not reflect his
wrongdoings.

The Sisolak appointed ethics board found nothing wrong with his behavior. 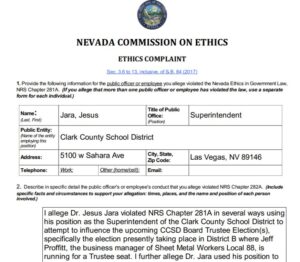 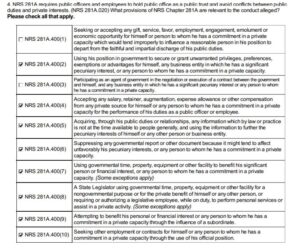 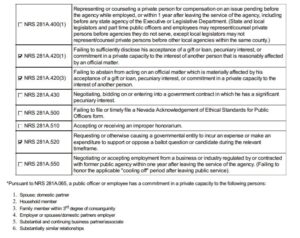