THE DAILY GRIND – SEPTEMBER 16, 2016: TRUMP TO HARRY REID: “Reid should go back and start working out again with his rubber work-out pieces”

TRUMP TO HARRY REID: “Reid should Go back and start working out again with his rubber work-out pieces”

It all started when Harry Reid had said earlier this week that Trump is “not slim and trim.” in response to his medical report disclosure.

In an interview with The Washington Post, Trump fired back at Reid, saying, “Harry Reid? I think he should go back and start working out again with his rubber work-out pieces.”

“Donald Trump can make fun of the injury that crushed the side of my face and took the sight in my right eye all he wants — I’ve dealt with tougher opponents than him,” the Nevada senator said in a statement Friday. “I may not be able to see out of my right eye, but with my good eye, I can see that Trump is a man who inherited his money and spent his entire life pretending like he earned it.”

According to Harry Reid’s account, his exercise equipment broke and hit him in the face blinding him in one eye last year. However, his brother was arrested for DUI that night with lacerations on his face following a family get together according to reports. 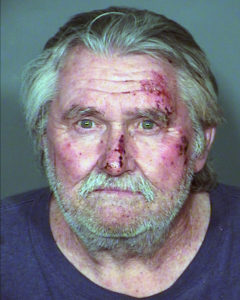