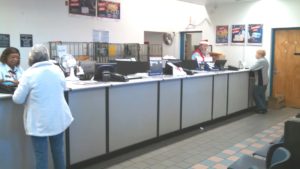 Now I couldn’t just leave the US Post Office and go somewhere else. I had not choice but to wait in that line, in a government office, for government employees who were in no hurry. They strolled around and took their time with no sense of urgency. This is why I believe in the free market. If people have a choice, if they can get the same products or services, for the same or less money, with better customer service they will.

I love shopping at Smith’s grocery stores here in Las Vegas, because they have great customer service. They make every effort to move the lines along. They have a clerk directing the lines and jumping in when needed to keep the lines moving fast. I get gas discounts for simply buying what I normally buy. Smith’s has better prices and better service than Walmart. I felt like I was at the post office many times while waiting in line at Walmart, with workers not bothering to call for more check out clerks while the line backed up 20 deep. One time while waiting in one of those 20 deep lines, a checkout clerk was stocking gum on the shelf and when I asked her to open her line she looked at me like I was crazy? She said no one had asked her to.

Another customer service issue that drives me crazy is when I ask a store worker where can I find a specific item and they have no idea where anything is in the store. You would think someone who’s worked at the store for more than a week would have a pretty good idea where everything is. That is just lousy training by the store leadership. Again I try and avoid those stores.

Competition and choice benefits the consumer by forcing businesses to compete not only on prices but service. The free market is a direct democracy. We vote every day with our dollars who should stay in business and who should close. That’s why over regulating businesses limits companies from opening new stores to compete against established businesses which hurts consumer choice. Too many regulations create artificial barriers to competition and “force” you to wait in lines like those at Walmart and the Post Office.