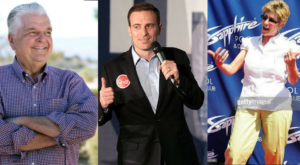 In a new poll published in the Nevada Independent and emailed out today by the Laxalt campaign, currently as of now, Clark County Commissioner Steve Sisolak is leading in the race for governor with 43% support of those polled, with Laxalt receiving just 37% support, and 20% was undecided. But when the race matched up with Laxalt and Clark County Commissioner Chris Giunchigliani it was an entirely different story.

Laxalt led with 40% and Chris G received just 38% and 22% was undecided. But the poll did not include Ryan Bundy and many in Republican circles are very worried about Bundy grabbing 10 to 15% all but guaranteeing a Democratic victory.

But Ryan Bundy’s people believe he can pull up to 36% and win the election by winning over rural voters and grabbing the huge independent voter group. almost a third of all Nevada voters are either non partisan or in a third party.