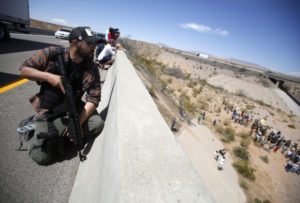 With Cliven Bundy and 14 others currently in federal jail awaiting trial for a laundry list of charges stemming from the 2014 stand off at the Bundy Ranch and the Oregon standoff earlier this year, according to sources, the Feds are set to return to the Bundy Ranch and finish what they started.

According to sources, Sheriff Lombardo, who was on the scene at the original Bundy Standoff,  and the Feds are planning to cut the roads into the area this time to insure no protestors are there to stop the roundup and enforcement of the court judgement. No time frame has been released for the enforcement action since their plan will use the element of surprise to insure it’s success.