WILL REPUB’S COURT VICTORIES SPELL TROUBLE AT THE POLLS IN NOV?

WILL REPUB’S COURT VICTORIES SPELL TROUBLE AT THE POLLS IN NOV? 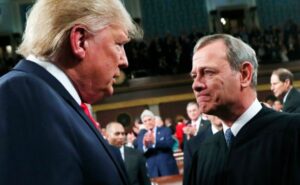 While Republicans may have plenty of issues that irritate us, the causes that agitated us to vote, that we fought for over the last 40 years, seems to have come to fruition this week. Elections are about motivating, and yes, agitating your side to get out and vote. Thanks to Pres. Trump and Senate Republicans, The Supreme Court handed down half a dozen landmark cases this week that changes everything. From religious school choice funding, to defeating New York’s strict gun laws, to today striking down Roe v Wade once and for all, Republicans have won in the courts this weak what they could not win in state legislatures over the last 40 years.

That means Democrats are seething with anger today. Don’t be surprised to see riots, I mean peaceful protests, across the nation this coming week. Democrats are now the ones utterly agitated and I expect them to come out and vote in force this fall. Just last week, only about 12% of Republicans turned out to vote in the Nevada Primary election. Usually the party out of the White House turns out in large numbers in off year elections. But Dems have done all they can to turn down Republican agitation by lifting all mask and vax mandates and CV restrictions months before the elections.

Yes we have high gas prices and a Democrat created economic crisis upon us, but Dems collecting government checks could care less if they can’t have an abortions. I now expect Dems’ turnout to be huge. And frankly our current crop of candidates are not the types to purposefully agitate Repubs to turn out to help win elections. Most of the Republican consultants are telling their candidates to focus on non-partisan and soft Dem voters turning down Repub rhetoric. Meanwhile Dems and their allies in the media are turning up their hate filled Rhetoric towards Repubs.

The one comfort Repubs now have is, we have giant landmark court decisions to strike down the crazy laws Dems will continue to pass in state legislatures across the country. This 4th of July, Republicans truly have our freedom to celebrate, thanks to Trump’s court.