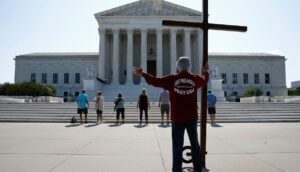 A man praying outside the Supreme Court on July 8, the day the court handed down decisions giving religious groups broad discretion in firing employees and denying contraceptive coverage. Photo by AP/Patrick Semansky

The U.S. Supreme Court just ruled that a Maine tuition assistance program violates the First Amendment’s Free Exercise Clause by excluding religious schools from eligibility. In 1981, Maine adopted its “non-sectarian” requirement banning the use of state money from going to religious private schools. The ban on funding private religious schools has been lifted across the country including in Nevada now.

Nevada’s Power 2 Parents group submitted a Constitutional Ballot Initiative earlier this year that, if passed, would allow parents to direct state money to private schools of their choice including religious schools. The opponents, led by Rory Reed, argued in the Nevada Supreme Court that Power2Parents’ Constitutional Ballot Initiative’s lack of a funding source makes it unconstitutional because it may take money away from public education. But this brand new shiny U.S. Supreme Court ruling allows the use all public money to be used at private and yes religious schools. Check-mate?

The Nevada Supreme Court is expected to issue their ruling tomorrow on the Power2Parents School Choice Ballot Initiative. 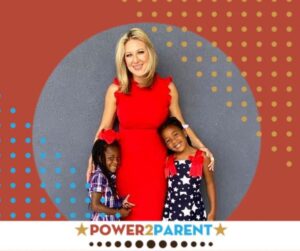 “The SCOTUS HAS RULED THAT THE EXCLUSION OF RELIGIOUS SCHOOLS IN SCHOOL CHOICE PROGRAMS IS UNCONSTITUTIONAL. This is a big win for school choice and parental rights in education, as well as religious liberty. Public dollars can flow to the schools that parents choose that best meet the needs of the child. As we make the case in Nevada, and many other states that the funding should follow the child, it is vital to have this ruling that leaves no question about the constitutionality of programs that do just that.”