WHY WAS HILLARY MISSING FROM THE CAMPAIGN TRAIL THE ENTIRE WEEK?

WHY WAS HILLARY MISSING FROM THE CAMPAIGN TRAIL THE ENTIRE WEEK? 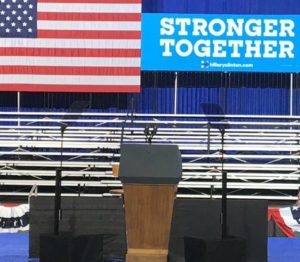 Hillary Clinton has been missing from the campaign for the last week. The campaign claims she has been preparing the entire week for the debate scheduled for Monday with Trump. On 9-11 Hillary collapsed and claimed she was only sick with pneumonia. It appears she may be farther sicker than previously thought. Remember Hillary lied the week prior to the 9-11 episode when she could not stop coughing at a Labor Day event claiming she only had allergies. In contract, Trump has been doing two campaign events at least every day. Clinton only has five scheduled campaign events for the entire month of September leaving most of the campaigning to Bill Clinton, Tim Kaine and President Obama. It’s turning out that Hillary is a weak little woman being prompted by men. How ironic.