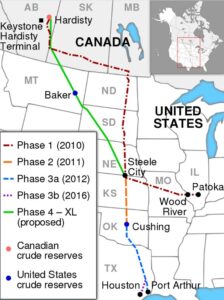 The Keystone Pipeline System is an oil pipeline system in Canada and the United States, commissioned in 2010 and owned by TC Energy and as of 31 March 2020 the Government of Alberta.[8][9][10][11] It runs from the Western Canadian Sedimentary Basin in Alberta to refineries in Illinois and Texas, and also to oil tank farms and an oil pipeline distribution center in Cushing, Oklahoma.[12][13]

The proposed Phase IV, Keystone XL (sometimes abbreviated KXL, with XL standing for “export limited”[18]) Pipeline, would connect the Phase I-pipeline terminals in Hardisty, Alberta, and Steele City, Nebraska, by a shorter route and a larger-diameter pipe.[19] It would run through Baker, Montana, where American-produced light crude oil from the Williston Basin (Bakken formation) of Montana and North Dakota would be added[12] to the Keystone’s throughput of synthetic crude oil (syncrude) and diluted bitumen (dilbit) from the oil sands of Canada. The pipeline became well known when Phase IV KXL attracted opposition from environmentalists, becoming a symbol of the battle over climate change and fossil fuels. In 2015 KXL was temporarily delayed by President Barack Obama. On January 24, 2017, President Donald Trump took action intended to permit the pipeline’s completion. On January 20, 2021, President Joe Biden signed an executive order[20] to revoke the permit[21] that was granted to TC Energy Corporation for the Keystone XL Pipeline (Phase 4). 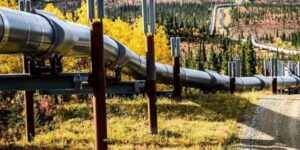 On day one of Biden’s Presidency, he signed an Executive Order halting construction of the KeyStone XL pipeline laying off some 11,000 union workers. The usual oil producing countries lobbied against it and helped fund the opposition to it through environmentalist groups. But the number one benefactor is China. If Canada cannot pipe its oil from the Oil Sands to refineries in Texas, then China becomes the number one player for the oil. Nation states have been playing the long game for decades trying to corner oil reserves around the world. Biden just handed China a big win and dealt America a huge blow. Biden has weakened America by letting our number one economic rival gain the upper hand with access to cheap energy.